We meet George from Ammousa!

George explains that through a negative situation such as the economic crisis, ideas are created. Guided by Kazantzakis’ phrase ‘when you believe in something non-existent with passion, finally… you create it’, it describes its involvement with brewing. Let’s get to know him…

Tell us a little bit about yourself? How did you get started? How did you come up with the idea to get involved with food?
My name is Danos Georgios and I am an engineer from Patras. My involvement with brewing began in 2016, when I accidentally tried fresh beer from a microbrewery. It was there that I realized the difference in taste/ quality and realized that beer is not only as we knew it and as we were used to it until then. Doing a little research, I realized that it is possible to make “homemade” beer and suddenly one afternoon I said the following simple… “why not?” and I made the decision to start making beer.
I made this decision when I didn’t even know what beer is all about, I didn’t even know it has water. But I wasn’t afraid to get involved.. I was not afraid to dream and say “I want to make the best beer in the world».
This is how “AMMOUSA” was born, which is not just a beer, but is the realization of a thought, the result of an effort, the realization of a dream. It is a confirmation and a reward for what each of us can achieve (somewhere in the basement of a house), if he has an appetite for knowledge and an appetite for creation.

Tell us a little bit about the brand. What does he stand for? What purpose did you create it for?
From the first moment I got involved in brewing, I had as a thought and as a goal, to combine two different same arts, the art of beer and the art of food and to create beers of special taste and aroma, which complements you or highlights the food. Perhaps this ultimately makes the difference, the fact that it has been created to accompany mainly some food and not just to quench your thirst.
Beer is not a soft drink and is not only a summer drink, it is not just to quench your thirst, but on the contrary it has the ability to generously give you a palette of sensations and flavors.
This is a big bet so that the consumers can learn that there are different beers, because unfortunately in Greece there is not the appropriate education and as a result beer is treated wrongly.

How did you get started? What difficulties did you face?
I started out as an amateur brewer. In the beginning all I did was to read too much in order to understand the whole process of brewing, parameters that affect it, mistakes that I have to avoid, etc., usually the beginning is made using a “beer kit”, ie ready mix of concentrated must, where all you need is its dilution and the addition of yeast, so you will gain the knowledge and confidence in the fermentation process. The cost for this start is not big, with about 100€ you can make your “own beer”. This process will take you about 30min, then it will take a week to knead and about a month to mature. In total, in about 30-40 days you have 20 liters of homemade beer ready to drink.
After 3-4 months I started improvising and “setting up” my “eco-brewery” to produce beer with the “all grain” method. That is, you get malt, hops, yeast and whatever additives you choose and create the beer as you want it. Here it presupposes to think and make the recipe with the proportions / quantities of ingredients. The result is almost always good and is better than the previous one.
If you are a person of “do it yourself” then in home brewing you will find an excellent hobby.
After the first brewing I realized that there are no secrets, only the good knowledge of the materials and the faithful application of the processes of brewing. Following the instructions, you become aware of the different varieties of malt, hops and yeast that combined, will give the result you have designed. The result is almost always good and is better than the previous one.
The hours I dedicate to the preparation of beer are hours of calm, creation and relaxation. The aromas of malt and hops take you out of everyday life and make you look forward to the result. Surely you have a lot of emotions such as the will to create something new, but also the doubt about the result. It is a personal celebration… that you should not be influenced by other opinions… that you have to follow your instincts and your senses. And that was the main reason I decided to be alone on this trip… because it is a journey of flavors and a journey with purely personal decisions.

Tell us about the raw materials?
“AMMOUSA” is an English IPA category beer with 5.50% alcohol. It is a type of pale ale that was developed in England for export to India. This one consists of water, barley, hops, yeast and ginger.

In 2017 he took the 2nd place in the Panhellenic home brewing competition held by the Association of Amateur Brewers of Greece.
In 2018 she got a star at the Greatasteawards2018 world tasting competition held in London. She was awarded and named one of the best in the world.
In June 2019 won the Platinum award in the taste-quality competition Olymp Awards – Food and Drinks Competitions 2019
In November 2019 got the highest distinction by winning the Double Gold Medal in the global European Beer Challenge competition.
In February 2020, she was awarded the first place in her category in tasting, by Beer & Bar magazine.

The distinction at the GreatTasteAwards was a success, the award at the European Beer Challenge was a confirmation. 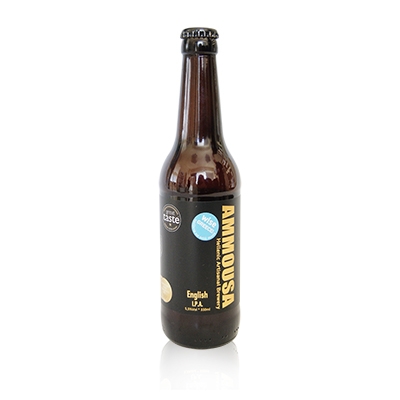 Give us some suggestions for your products (ways of use except the classics, tips or recipes, etc.)
AMMOUSA English I.P.A. has a deep cloudy bronze color and a strongly complex taste with aromas of citrus, melon and watermelon. Aromas that completely flood the palate causing an intense tasty route through flowers and fruits and ending with the ideal bitterness of hops. It combines excellently with shells, grilled meat and generally with salty or spicy flavors rich in spices and spices.

Can Greek producers make a difference in the midst of the crisis?
I bet they can!!! The crisis often creates opportunities or rather creates ideas. We all need to get out of the situation of not having money or not having time… that is an easy excuse. We have to dream, that’s what we have to do.
Here I will say a phrase of Kazantzakis that from the first moment I dealt with brewing I have it in my mind “When we believe in something non-existent with passion, we finally create it. What never happened is that we didn’t crave enough.”.

Why did you choose to participate in and support the Wise Greece Movement?
That you become with passion and love is something that I support and definitely want to participate in. To have such amazing products of Greek small producers at a table is admirable and enviable and I would like everyone to be among them.
The most important thing, however, is that from all this movement and effort comes social work, helping our fellow human beings in great need and this is what represents many of my beliefs.